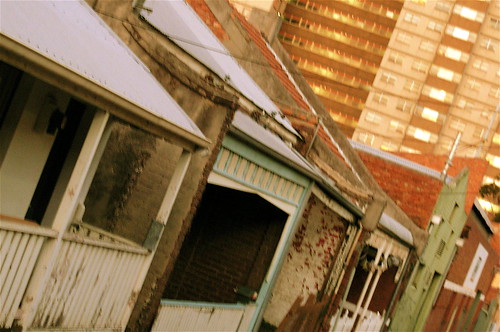 I have to say, Wellington St between Johnston St and Gertrude St is not a nice place. In fact, it’s the closest to a slum I know of in Melbourne (see pic of a side street off Wellington St).  At twenty to eight in the evening of Sunday 28 October 2007, a Collingwood man answered a knock on his Wellington St unit’s front door. Four black-clad men shot him in the lower body. He’s still alive. Sounds like a reprise of the gangland murders a bit too close to home for my liking.

By the 31st, Bou’ellas Kahalil, 32, had been arrested at Craigieburn police station and charged with seven offences including attempted murder, aggravated burglary, false imprisonment, intentionally causing serious injury, kidnapping and being in possession of an unregistered firearm. And another man from Port Melbourne, one-time home of Hizir Ferman, has been arrested and charged as well. See The Age‘s article here.

Yesterday, the Police announced they’d like to have a little chat with Robert Musso of Mill Park, but said not to approach him. The Age reported in 2004 that a top cop, Simon Overland, was a bit frustrated with what he perceived to be the lack of assistance from the courts in the police’s efforts to quell the spate of gangland murders. The article said:

‘Police fury over the granting of bail to crime patriarch Lewis Moran, gunned down this week in a Brunswick gaming club, is well known. Police are also dismayed by a County Court decision to give known gunmen linked to two murders, Hizir Ferman and Robert Musso, 12 months’ jail for carrying firearms when law provides for a maximum penalty of 15 years. Both men were out on parole when the Special Operations Group apprehended them with loaded guns.’

Someone named Robert Musso has been in jail before. He was sentenced to a year’s imprisonment on 30 March 2004: R. v. Ferman and Musso, a sentence which the Court of Appeal later referred to in another man’s case as ‘manifestly inadequate’: DPP v Faure [2005] VSCA 9.

Musso claimed to have suffered injuries in jail. According to the judgment in Musso v Department of Justice [2004] VCAT 1268:

’10 On 19 November 1999 there was a considerable disturbance in Port Phillip Prison. A prisoner was stabbed. A lock-down ensued. A group of prisoners, including the Applicants, were forcibly extracted from their cells in Swallow Unit for the purpose of relocating them in Charlotte Unit, which is apparently more secure. This extraction was carried out by members of the Tactical Operations Group (“TOG”). It is alleged, in essence, that, during this extraction and relocation, excessive force was used by TOG, and that prisoners suffered injuries as a result.’

According to The Bulletin, Mark Mallia led the knife attack.

‘A knife attack last month of Robert Musso, a former ally of Nik “The Russian” Radev in Barwon prison by inmates loyal to Carl Williams shows how volatile the situation remains. The main attacker in the group hit has been named as a player in the murder of western suburbs drug dealer Mark Mallia. To understand the calibre of human being we are dealing with, it’s worth remembering how Mallia was killed. They tied him to a chair, bound and gagged and then probably tortured him with a soldering iron, before strangling him. They then poured petrol over him and set him on fire inside a wheelie bin, before chucking him down a stormwater drain.’

More recently, a case named DPP v Robert Musso & Khalil Bou’elias was listed for a hearing in the Supreme Court of Victoria on 15 December 2006.