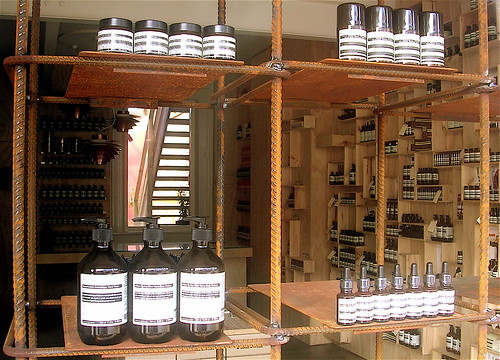 Well, I’ve been nodding off again. You’ve just missed Melissa Jackson‘s Fringe Festival performance. Her frantically making her famous hats in the front window of her Gertrude St shop in the leadup to what used to be called the Melbourne Cup and which we are increasingly accepting as the Spring Racing Carnival.

But here’s something that may be worth trotting along to: the Map 44 Urban Art tour at 2 p.m. this Saturday (14 October 2006) departing Dante’s, led by a man described in the official literature as half Aboriginal and half Ethiopian, Jason Tamiru. Seems many of the shop windows on Gertrude St between Smith and Brunswick Sts have been decorated and he’s going to show us around.

And now to Aesop (pictured). They have a beautiful website, I’ll grant them that. They peddle skin stuff at $60 for 200 ml, with quotes from Voltaire, Virginia Wolf, and Camus. They have redefined luxury on the back of the industro-chic so lapped up down the road at Industria, promising elixirs so wondrous — we’re talking topically applied antioxidants — that they are sold in these austere apothecary’s vessels.