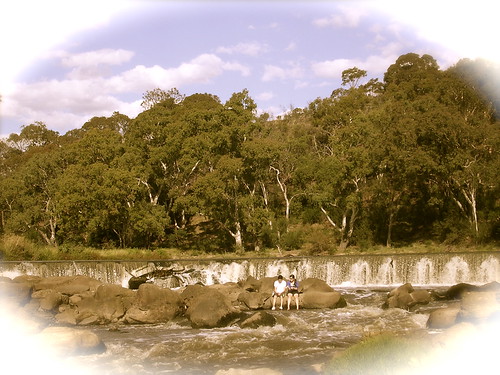 The Sketchbook tells us:

“Dights Falls, a natural rock barrier across the Yarra River are named for a pioneer settler, John Dight, although they were first seen by John Grimes, the original explorer of the Yarra, in 1803. Grimes sailed up the Yarra from its mouth at the head of Port Phillip Bay, but went no further than the falls which blocked his passage.

Dight, a flour miller, saw the potential of the falls which he believed could be utilised by harnessing the river to his purposes. He erected a flour mill and millrace nearby. His project was dogged by trouble. The Yarra fluctuates greatly from season to season, and even from day to day. Unlike the reliable English millstreams, with which DIght was familiar, the Yarra River can be a capricious, not to say rebellious servant.

When he sought to import steam-powered milling machinery from England to supplement the uncertain supply of waterpower, he was again unlucky, fo rhte ship carrying the machinery was wrecked en route to Melbourne.

When a second shipment did finally arrive, the colony’s trade was adversely affected by a depression. As if this weren’t enough, the mill was seriously damaged by fire, though after repairs it operated for a time before a second and larger fire destroyed the mill completely. It is not surprising that this succession of disasters convinced Dight and others that the falls had a very limited potential for industrial use.

The falls still serve as a natural barrier to the movement of traffic, and in earlier times they were certainly a major factor in limiting expansion upstream. Had they not existed, the Yarr might have become a highway enabling people to move inland until stopped by the greater barrier of the ranges.”