Here’s an article about actors Fred Whitlock and Alison Whyte who bought the Terminus Hotel in Abbotsford 10 years ago when it was selling a keg of beer a week, and have kept it going strong ever since. Now, it’s one of Melbourne’s best pubs, with drag bingo and “pub aid” which is doing good things for Cambodians.  Umm, sorry to The Age for stealing their photo… 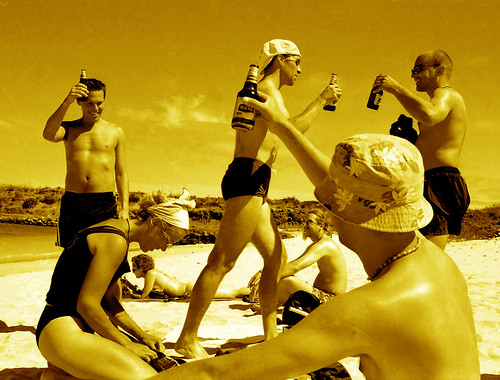 Here’s a useful starting point for an exploration of Abbotsford’s pubs and bars.

Unless my Google search skills aren’t up to it, though, Abbotsford doesn’t have any happy hours featured at The Happiest Hour.com which an acquaintance of mine claims to run, or to have invented, or something.

When in Abbotsford, do as the Abbotsrigines do and drink Abbotsford Invalid Stout, or Abbots Lager, or Abbotsford Sparkling (or any other CUB product of course), or a Mountain Goat beer, though that’s pretty weird, and actually from next-door Richmond.  Beer critic Willie Simpson says of the Sparkling:

“Abbotsford Sparkling Ale is another heavyweight contender (8.5 per cent A/V), which CUB created to celebrate a century of brewing at Abbotsford. Unfortunately, this rich, malty ‘barley wine’ won’t be released commercially, but it does prove the big boys can make serious specialty beers.”

The photo, by a Norwegian living in Malaysia who was in the Galapagos Islands at the time is from Aliasgrace’s wonderful collection of images at Flickr.

The Skipping Girl got heritage listed. Apparently, she is known as “Little Audrey”. According to News.com:

“The sign, above 651 Victoria Street, … was erected in 1970 to replace the original 1930s sign, which was the first animated neon sign in Victoria and sat above the Skipping Girl Vinegar Factory until 1968.

The newer ‘Audrey’ is slightly smaller than the original and has slightly longer hair, with her dress flying up higher at the back.”