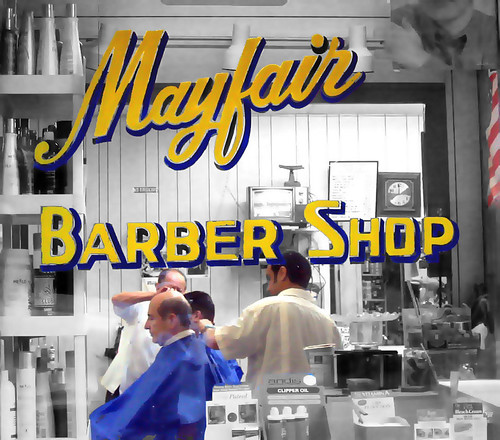 They just chopped me mop over at Doctor Follicles, opposite Dr Java, in Gertrude St near the corner of Smith St. The place rocks. You’ve got your barber chairs, your retro wallpaper, your slightly more tuneful than usual rap music going on, kitsch prints of paintings of naked chicas, 50s wardrobes converted cleverly into hairdressing consoles by the installation of tiny sinks into the woodwork, and dudes with scissors, and even one lady barber, snipping away at the rate of 20 cuts a day, each.

The fellow before me seated himself in front of Madame Snippe and told her that he had got really drunk the previous evening and had begun to cut his own hair. He needed it “evened up”.

But best was the laconic attitude of the nameless cutter who didn’t need to flatter me to earn a $55 fee (the fee was $24 and included a stubby of Coopers Pale Ale (or “Coopers Green”)) and spoke contemptuously of the professional flatterers with scissors who are his brethren in the salon industry. Second best were the piles of hair lying around on the floor like fleece in a shearing shed. Why, I wondered, do all the other barbers and salonistas sweep it up so frequently and obsessively?

The decor is kind of Builders Arms Hotel before it got rennovated recently.
These guys are onto something. They’ve invented the new barber’s shop. They’re churning people through without appointments with a slightly aloof but nevertheless grungily hip service ethic reminiscent of the front barstaff at the Napier Hotel. When I got there, three people were waiting and three cutting. I didn’t have to wait long. It was a bit like going to a bar with good music but still being able to talk. It is all a lot more fun after a beer. The only other blogger to have blogged his Dr Follicular haircut reports having been offered anothery when he chugged his first stubbie.

They’re open to 6 p.m. Tuesday and Wednesday, 7 p.m. on Thursdays and Fridays, and 9 a.m. to 4 p.m. Saturday. Their telephone number is 9416 3999. They are no. 240. They’ve almost snuck under the google radar. There are no photos of them and their store anywhere on the web as far as I could tell. So the barber shop image is from Manhattan, one of Lorenzodom‘s, a bloke with 14,500 photos, and good ones at that, on Flickr.