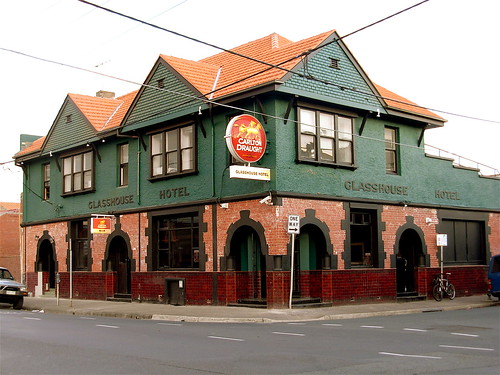 Gertrude St is my preferred east-west bike artery into the heart of the city, but from time to time I find myself wandering along Gipps St, one block north. It boasts the Laird O’Cockpen Hotel which in my imagination might conceivably be the place that erotic poet and Liberal parliamentarian Bruce Atkinson visited out of professional obligation, as well as Nicholas Dattner‘s emporium of super expensive wooden tables (did you know his old man was a British spy on whom Trevor Howard’s character was based in the 1949 zither music-rich The Third Man, one of the most famous films of all time?). It also sports the Glasshouse Hotel. I thought it was standing vacant, but I found out a year or so ago it was doing a roaring lesbian trade on certain evenings, and always had done. Now I find Maria from Dante’s in Gertrude St has bought the place. A little online pamphlet named Same Same says of the development:

‘Maria reveals that the Glasshouse will be maintaining its name and will be open for business from Tuesdays through to Sundays. Noted events will include the Flirt and Bitch is Black parties, plus cabaret, funk, karaoke, trannie, band and disco nights.

She describes the renovation as “classic – not as retro as Dante’s” but “in my style”.

Divine lookalike Feral Beral and ex Freakazoid DJ Arlen Da Silva are just two of the club identities linked to the new activities, with Feral Beral hinting that there will be “pole dancers and performance artists on most Friday and Saturday nights”. Up until recently, Arlen Da Silva was promoting Saturday nights at Laneway, a venue that sits at the rear of Seven. He is now also involved in Eve in Southbank with Jono Francisco and is famous for a disco/house/old school sound.’

The party continues all weekend, with regular action each week from Wednesday through to Sunday announced.

Fridays feature DJ Arlen De Silva and misterjob playing a spectrum of music til 5am, with guests Fin on sax, Andy D on percussion, Luke McD, Chestwig, and upcoming guests Agent 86 on Friday 20 April and Butch on Friday 27 April, and Nick Whiteside on Friday 4 May and Nigel Last on Friday 18 May.

Saturdays are to be known as the Glasshouse Variety Club and are hosted by Shirley Billings who will reside over a night of comedy, burlesque and “general hilarity”. Dinner is available from 6pm and the show starts at 9pm, followed by resident DJs Ennio Styles, RaMBL aka Richard Campbell and Declan Kelly til 5am. Entry on Saturdays is free.

The Glassy is open on Sundays from 12 noon for a classic Sunday roast for $15, with chilled beats all day from Fin and Andy D, and Dolly’s Karaoke Kaberet from 8pm.

Then on Wednesday, it’s a night of Salsa dancing with Emma. Salsa classes are at 6.30pm and 7.30pm, beginners are welcome, and it’s $10 entry.

The Bitch is Black is scheduled for Saturday 5 May.

The Glasshouse is open for lunch, dinner, snacks and wine every Tuesday to Thursday 11am – 1am, Friday and Saturday 11am – 5am, and Sunday 12 noon to midnight.’