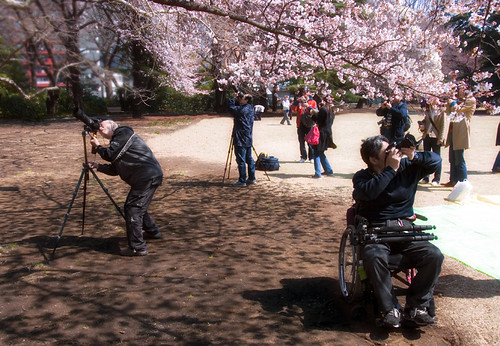 Reviewing is a difficult art. There are certain constrained forms I particularly like. The obituary. The chess column. The restaurant review. All so constrained by the necessaries, requiring clever use of what little room there is for the decorations. The English tend to do them best. Zia Mahmoud does the most with the least with The Guardian‘s bridge column. Haiku fascinates me. The very word puts me on edge. I hate haiku about as much as shakuhachi music, but at the same time I love it about as much as a good egg breakfast, a short speech, photos of Japanese taking photos of cherry blossoms with unbelievably expensive cameras (snap thanks to a great photographer, Mark Alberding), and the way sacred cows get in the way of traffic in New Delhi. Short is good. Less is more. Small is beautiful. Metre is a useful discipline for the poet’s natural tendency to ungrammatical excess. Some of the most elegant writing going around today is to be found on this website. I particularly like:

After enough beers
My intelligence dazzles.
Others are jealous.

Bagged a centerfold
But awakened to road kill
Damn you, beer goggles

All of which is an ironically long introduction to Jamie Wodetzki’s Breakfast Blog. He has concision down pat, and does well with the form of the restaurant review. Since first reading his blog, I was sure he was a lawyer. Many lawyers can’t write, but some can, and his writing had the ring of a lawyer who could write. A moment’s google searching confirmed my suspicions. See Jamie’s review of Cavallero here, Birdman Eating’s here, Cafe Rosamond’s here, Richmond’s New York Tomato Cafe’s here.

John Lethlean does well too. I think it would take some self-confidence for the town’s leading food critic to give Lentil as Anything a glowing thumbs up, but that’s what he did.