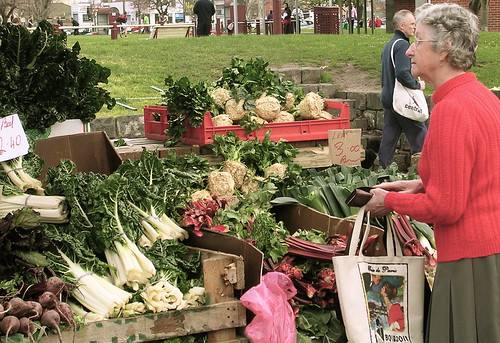 More on this page. 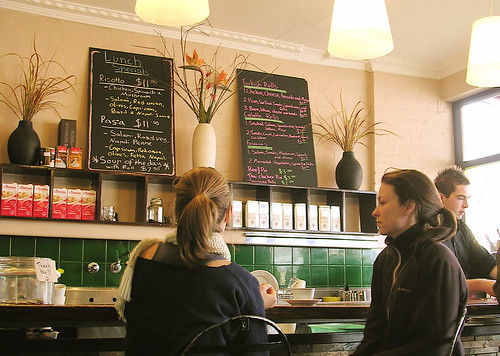 Miss K and I went shopping at the Richmond Market in Gleadall St (home too of the Richmond Leisure Centre). When I was young, and was convinced by some subterfuge that pulling a market trolley for my father was an excitement to be looked forward to, there was a time when he gave up going to the Queen Victoria Market in favour of the closer Gleadall St Market. I was not impressed. Now I like it a lot. It is a plainer affair than the Queen Vic, but has everything one might need, including the pictured cafe: vegetables at real prices (spinach $1.90 instead of $3.80 at the supermarket, potatoes priced in cents not dollars per kilo), coffee, pastries, bread, fish, flowers, dried things, fruit. It’s open from 7 a.m. until 12.30 p.m. on Saturdays. Enquiries 9205 5555. 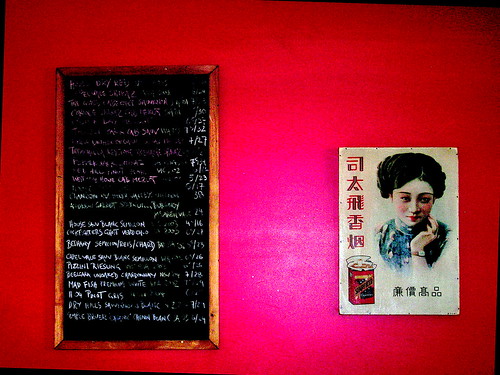 Now I do like a bit of Chinoiserie moderne, and it’s a la mode right now in newly degrunged pubs and quirky Japanese cafes alike. The Park Hotel is a truly excellent pub in Abbotsford, which manages to be grungy and degrunged at once, down Nicholson St a bit from the Retreat Hotel on the other side at no. 191 (9419 4352). It has copies of Truth lying around (and I thought defamation writs had shut it down, but it seemed to have morphed even more into a racing tabloid), itself more kitsch interior decor than true fodder for the regs probably but then I’m not sure about that, and a good beer garden, with a pool table. Its kitchen serves up tasty tucker and its prices are reasonable. One time, its taps had broken down and they were selling stubbies for the price of pots. That was a good day. Its present incarnation’s having its third birthday on April Fool’s Day, and, unless they’re joshing, there’s going to be fillums ‘n all. [I can’t find any evidence on the internet of The Truth being extant, but that doesn’t mean anything. I did find this interview of a former editor though, in which the rag is described as something read by folk who won their money on the racing pages and spent it on the brothel pages, and in which it is recounted that a Mr Justice Innes described it in the 1890s as “a wretched little paper reeking of filth”. I also learnt that it broke some serious stories, including what happened at Maralinga with the A bomb blasts. Those were the days, when it would sell 400,000 copies a day.]